As the human population continues to grow and expand worldwide, more space will be needed to live, cultivate food, and gather water.  The displacement of these formerly wild places will continue to result in increasing numbers of human-wildlife conflicts.  This process is, and will become even more, important for management and conservation of wild animals into the future.  The only way to garner world-wide support for wildlife conservation is to reduce the frequency of conflicts between animals and the people who deal with them on a daily basis.

Figuring out ways to reduce conflicts has been a hot topic in wildlife management and conservation since its inception.  Many researchers and conservation thinkers have spent entire careers trying to solve problems.  But one thing is sure, there are many facets to the conflict (e.g., the behavior of the animal in question, the behavior of humans, and the landscape), and there is almost never one single solution for every problem.  What we are finding out is that solutions take “out-of-the-box” thinking along with a multifaceted approaches.

My research has been focused on three study systems.  The first is based on human-black bear conflicts within urban areas.  This work has provided a basis for the community of Missoula, Montana to further develop their management procedures to minimize conflicts.  We have determined that human behaviors have changed over time (Merkle et al. 2011), that the probability of conflict can be predicted based on a relatively simple suite of landscape variables (Merkle et al. 2011), and that apple trees seem to be much more important than garbage in the development of urban bears (Merkle et al. 2011, Merkle et al. in press). 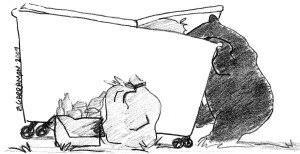 The second is based on Mexican wolf conflicts with livestock in Arizona and New Mexico.  This work has provided a basis for understanding the basic diet of Mexican wolves as it relates to natural and domestic prey bases.  What we found is that Mexican wolves do eat livestock, but the amount of livestock can vary highly by individual pack, and by year.  The implications of this research suggest that most of the conflicts are pack-specific and that when livestock is available year around these packs had more livestock in their diet (Merkle et al. 2009).

Finally, the plains bison population in Prince Albert National Park are free-ranging (un-fenced) and occasionally cross the park boundary and forage in private agricultural fields.  This creates a conflict because large groups of bison can eat significant amounts of food, cause damage to inedible crops (e.g., canola fields are susceptible to structural damage even though bison do not each canola), and destroy fences.  My work on range expansion will provide a means to predict the extent of the conflict into the future, and provide knowledge to where landscape level mitigation should be implemented.