Jerod is the Knobloch Professor of Migration Ecology and Conservation within the Department of Zoology and Physiology at University of Wyoming.  He is also a research associate with the Wyoming Migration Initiative. Jerod is a quantitative wildlife ecologist with broad interests in understanding how the movement of animals relates to environmental heterogeneity and change, and how these interactions scale to population- and landscape-level ecological processes. Jerod’s specific research foci include movement and migration ecology, fitness consequences of behavior, how cognition and innovation influence foraging behavior, and conservation and management of large mammals. 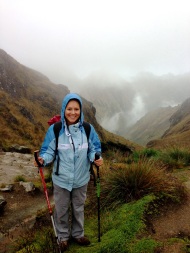 Justine A. Becker, Postdoc. Justine is a behavioral ecologist broadly interested in understanding the ecological causes of individual behavioral variation and the consequences of this variation at the population- and community-level. Her work focuses on why, when and where animals decide to move, how these individual decisions are affected by spatio-temporal heterogeneity, and their impacts on ecosystem processes. Justine received her B.A. in History and B.Sc. in Biological Sciences from the University of Auckland in her home country of New Zealand. She recently completed her Ph.D. in Ecology and Evolutionary Biology at Princeton University where she studied the movement ecology of antelope in Mozambique’s Gorongosa National Park. At the University of Wyoming, Justine is continuing her research on the individual drivers of animal movement decisions, focusing on the origin and maintenance of multiple movement strategies in Wyoming’s pronghorn populations. Outside of work, Justine loves being outdoors, hiking, and birding. Justine’s website: jabeckerecology.com.

Nate Bowersock, Wildlife Data Analyst. Nate is originally from Michigan, but has been working with large mammals, such as wolves, black bears and grizzly bears, for the last 12 years in the Greater Yellowstone Ecosystem. He has a BS in wildlife ecology and management from Michigan Technological University and a MS in fish and wildlife management from Montana State University. He is interested in how the availability and quality of resources influences the movement and density distribution of wildlife species. Currently, Nate is assisting the Merkle Research Group with studies focused on how the quality of spring forage influences grizzly bear movements throughout North American, and how energy development impacts resource use by ungulates in Wyoming. In his free time, Nate likes to travel and go on birding adventures with his wife.

PhD student. Molly grew up in southwestern Colorado and has a BA in Integrative Biology from the University of California, Berkeley. Her PhD research focuses on ungulate (bison, elk, mule deer, pronghorn, and bighorn sheep) migrations in the Greater Yellowstone Ecosystem. She will be investigating the community and movement ecology of these species to help understand why a large diversity of movement strategies exist among sympatric ungulates. Previously, Molly worked as an Environmental Scientist with the California Department of Fish and Wildlife where she conducted habitat and wildlife monitoring on state lands and analyzed camera and GPS telemetry data to investigate wildlife use of highway crossings. In her free time, Molly enjoys hiking in the mountains and traveling.

Emily Gelzer, MS student. Emily received her bachelor’s degree in environmental biology at Fort Lewis College in Durango, CO. Emily fell in love with the southwestern landscape and found her passion for fisheries and wildlife while working different technician positions scattered across the west. Emily’s research will focus on how mule deer fidelity to migration routes at the individual level scales up to patterns at the population level and if this relationship is mediated by habitat consistency. Emily enjoys basically anything outdoors, warm weather, the little things in life, and spoiling her dog.

Mike Laforge, Postdoc. Mike has a PhD from Memorial University in St. John’s, Newfoundland, Canada. Mike’s research focuses on how migratory animals deal with inter- and intra-annual variation in resource phenology. His research aims to bridge behavioral and spatial ecology by examining consistent individual differences in migratory behavior. His research at the University of Wyoming focuses on how individuals acclimate—or how populations might adapt—to changing environmental conditions by looking at how individuals acclimate their migration and resource selection behavior as a function of the timing of spring green-up. Mike enjoys hiking, canoeing and exploring new places. Mike’s website: https://mammalspatialecology.weebly.com

Marie-Pier Poulin, MS student. Marie-Pier grew up in Québec surrounded by the outdoors and quickly became fascinated by the natural world. She graduated with a bachelor’s degree in biology from the Université du Québec à Rimouski in 2019. As an undergraduate, she spent two summers studying arctic foxes in the Canadian High Arctic, where she developed a strong interest in movement ecology. For her MS, Marie-Pier’s research will investigate how roads influence migratory ungulates across western North America. Part of her research will also focus on movements of GPS collared elk along the Trans-Canada Highway in Yoho National Park. Marie-Pier enjoys long walks in the tundra, spending time in the mountains and loves skiing in the winter. 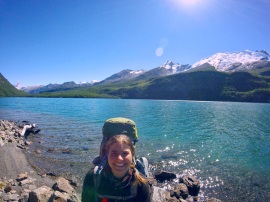 Anne Scholle, PhD student. Anne grew up in Maryland, and has a BA in psychology from Dickinson College and an MSc in Conservation Science from Imperial College London. Anne’s PhD research focuses on the role of cognition and sociality in group dynamics and collective decision making in migratory ungulates. Prior to joining the Merkle Research Group, Anne was a research intern with the Asian elephants at the National Zoo in Washington, DC and a program manager with The Center for Mind-Body Medicine. Anne loves backpacking, Ultimate Frisbee, elephants, and lazy mornings with coffee and a crossword puzzle.

Tana Verzuh, PhD student. Tana grew up in western Colorado and has a BS in zoology from Colorado State, an MS in science education from Montana State, and an MS in zoology from the University of Wyoming. Broadly, Tana is interested in movement ecology and animal learning and memory. Tana’s research focuses on the reintroduced bison population in Banff National Park, Canada, aiming to understand the underpinnings of how animals learn a novel environment and how that knowledge influences space use and home range formation. In addition, she is interested in how sociality influences learning and the effectiveness of various interventions, such as prescribed burns and fencing, on space use. When not in the lab or in the field you can find Tana on the river, riding her bike, or in search of powder with her dog, Goose.

Becca is studying climate and movement ecology, specifically how movement patterns of ungulates respond to extreme temperatures. On a broad scale, she is interested in pursuing a professional and academic career with large mammals: how they move, inter- and intraspecies interactions, and how scientific research can lead to conservation of species and habitats. Prior to joining the Merkle Research Group, Becca primarily worked on carnivores, including wolves, cougars, ocelots, bobcats and leatherback turtles. Becca loves traveling, tea, unlikely animal friendships, and exploring the backcountry. Becca is currently a biologist with Grand Teton National Park. 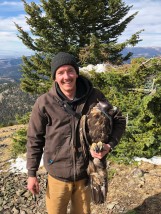 Nathan completed a B.S. in Wildlife Biology and Management in 2014 from University of Wyoming while racing on the University Nordic ski team. Nathan has held a number of field jobs. Notably, Nathan has helped document the first flammulated owls in the Jackson Hole area, and has worked on golden eagles and lead exposure. Nathan’s current research focuses on golden eagle winter habitat usage and more specifically, how various risks plays a role in winter movements. Nathan enjoys running, biking, skiing, climbing, and basically anything else outdoors.

Mallory Sandoval Lambert, MS (2021). Mallory grew up at the foot of the Wasatch mountains in Utah where she discovered her passion for wildlife and the outdoors. She received a bachelor’s degree in biology and a minor in spanish from the University of Utah in 2013. In the Merkle lab, Mallory’s project will investigate human development thresholds on ungulate movement and migration, specifically looking into the density at which residential, agricultural, and energy development begin to have a significant impact on movement and migration. Outside of the lab, she loves hanging with her dog, climbing rocks, and traveling to Latin American countries. Mallory is currently a PhD student at Utah State University.